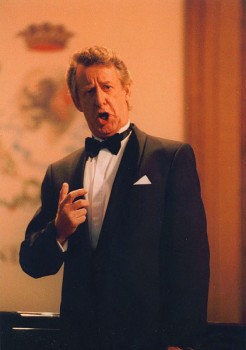 Walter Donati was born in Potsdam (Germany) but grew up in Milan (Italy) where he also studied and first of all worked as a recognized graphic-designer in advertising. Subsequently he began his second career as a celebrated opera-singer, first as a tenor, and then as a baritone. Donati began his tenor-career with three European tours with Schlote-Productions. In 1981 he sang the parts of Riccardo in Verdi’s “Un Ballo in Maschera” – in 1982 Manrico in “Il Trovatore” and Alfred in “Die Fledermaus” (J. Strauß). In 1983 he made a very successful Italian debut at the Teatro Comunale in Alessandria in the rôle of CarloVII in Verdi’s “Giovanna d’Arco” conducted by E. Müller and D. Gatti. In 1984 he was already singing at La Scala, Milan in the rôle of Walter von der Vogelweide in Wagner’s “Tannhäuser” conducted by G. Kuhn and also in the rôles of Arvino and Oronte in Verdi’s “I Lombardi” conducted by G. Gavazzeni. In the season 1985/86 he appeared again at La Scala as Malcolm and Macduff in Verdi’s “Macbeth” under C. Abbado A. Gatto. After auditioning for R. Muti he was engaged in the rôle of Erik in a new production of Wagner’s “Der Fliegende Holländer”. During his tenor career, in which he interpreted 37 rôles, he appeared at many renowned Opera houses.

At the beginning of the nineties Walter Donati decided to change from tenor to baritone. After a year of intensive study he made an extremely successful debut, again during two tours with Schlote Productions in the rôles of Marcello in Puccini’s “La Bohème” and Germont in Verdi’s “La Traviata”. His change of voicerange caused Walter Donati to become a genuine Verdibaritone. With Verdi’s “Nabucco”, which would become one of the high-lights of his repertoire, he opened the newly built Opera House in Helsinki in 1993 and celebrated a great success. There followed countless engagements at important Operahouses and festive productions of “Aida” and “Nabucco” with “Operama Creations” in Europe and South-Africa. As from 2003 to 2011 Walter Donati was a member of the ensemble of the Baden State Opera-house Karlsruhe (Germany) where he has augmented his repertoire. In addition he is internationally sought after by many Opera-houses and in concert-halls.